As some of you know – because you have had to put up with me droning on about tea for the past month and a half – I’ve registered for the excellent Tea Sommelier*** program at Vancouver Community College.

The place is located in the Heart of Darkness (West Pender at Cambie), and feels like the inner city school from Welcome Back Kotter… but it is also a stone’s throw from the most delightful chocolate quinoa cake with cardamom cream, and a do-able walk from my favourite hipster cafe. And if I get to The Big City by mid-afternoon, I even get to take in a movie at the Dead Mall formerly known as Tinseltown.

It’s easy to mock the idea of going to school for three years to learn about tea. That is, until you’re in the classroom with 14 fellow tea nerds (plus our instructor Brendan, whom I refer to as – using my inside voice – The Tea Sensei).

The girl to guy ratio is 2:1. There are three hobbyists; some who want to start tea shops and/or tea rooms; while some have formal culinary training. One woman’s mother invented bubble tea, and her family operates a large Taiwanese tea empire.

We learned that the real demand tea-wise in Canada is not so much for retail (225 David’s Tea locations will open this year in California alone!), but rather for importing and blending tea: the behind-the-scenes stuff. Hmmm… interesting!

After my first three-hour session at what I fondly think of as Tea School, buddy Detta declared me a tea snob.

For example… once you learn why tea bags are a joke, it’s pretty difficult to continue using them. Spoiler alert – you can’t unknow what you already know, so skip this paragraph if you want to keep using your (pedestrian!) teabags. Teabags are inferior because: 1. There is not enough tea in the teabag to make a proper cup; 2. There is not enough room for the tea to properly expand, meaning a weak, non-representative cup; 3. The tea in a teabag consists of the fine dust and fannings, in stark contrast to the broader flavour profiles to be found in the larger-leaf loose teas. Tea dust is used by soda companies (and Red Bull!) to boost caffeine levels.

And did you know that ALL teas (we don’t count herbals here, because that’s just herbs in a cup!), come from the SAME plant? The categories of tea (white, yellow, green, oolong, black, and Pu-ehr) are linked to the intensity of the oxidation / processing that they undergo, and also what parts of the plant are picked (or plucked). It’s also about the terroir of the place: altitude, soil, climate…

And when we taste (or ‘cup’) teas in class, the goal is to slurp it off of the spoon at 125 miles an hour, so that the air and tea spray all three sections of the tongue. And The Sensei knows when you’re only doing 40 in a 125 zone. And the spitting – I can’t get used to spitting the tea out – it’s supposed to taste completely different ‘on the way out’.

When we cup teas, we assess the dry leaf, wet leaf, and the tea (or liquor) itself. It’s pretty scientific, with the loose dry tea weighed to the tenth of a gram, and the water temperature and volume also closely monitored. More like a science lab than an outing at The Empress! 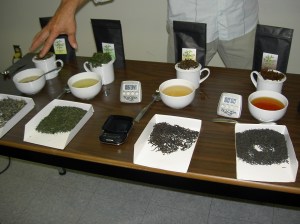 On the first night, The Tea Sensei showed us a white, yellow, green, and oolong tea.

Anyway, I could go on.

That was just the intro course. Next up are courses on sensory development, history, production, food pairings, geography…

But first, I need to pass this intro. It’s telling that the passing mark has been lowered from 75% to 60%.

Part of the final mark is based on a class presentation, with students in groups of twos and threes. The most transporting presentations of the night were delivered by two of the five groups. One group demonstrated two methods of preparing tea: the Gongfu tea ceremony and the method for yerba mate (with a gourd and a bombilla! Who knew?). The second stunner group offered a food pairing, matched against three Asian teas under the guise of a tea company making a bridal shower pitch. Absolutely humbling. Truly.

We sweated the most over the blind tasting after the presentations, when we were asked to identify five teas, without the benefit of seeing the wet / dry leaves.

After that, it was on to a 50-question multiple choice exam. Some questions were ‘gifts’ while others were absolutely perplexing.

Fingers crossed. Now we wait for our marks…

Oh! I made a serendipitous discovery while scouting out a place to get a few hours of tea studying in before The Big Night. In Gastown, just off of Blood Alley in Gaoler’s Mews is a fantastic retail tea shop and tea room called Apres Midi Premium Teahouse. They are in the process of rebranding to Gastown Tea Company. Turns out the owners took the same tea program, and The Tea Sensei was contracted as a consultant to build their tea menu. The space is late 1800’s, and gorgeous. I plan to devote an entire post to this place (with pictures), so stay tuned.

Apres Midi is the shop on the right.

And my dirty little secret: I still take half-and-half cream in my tea. Shhhh… don’t tell The Tea Sensei.

*** a note about the word ‘sommelier’ itself. I have been blown away by how many folks don’t know this word. Kinda makes the whole ‘tea sommelier’ thing a bit of a drag to explain when you have to back up and describe what a (wine) sommelier is. People! Come on!